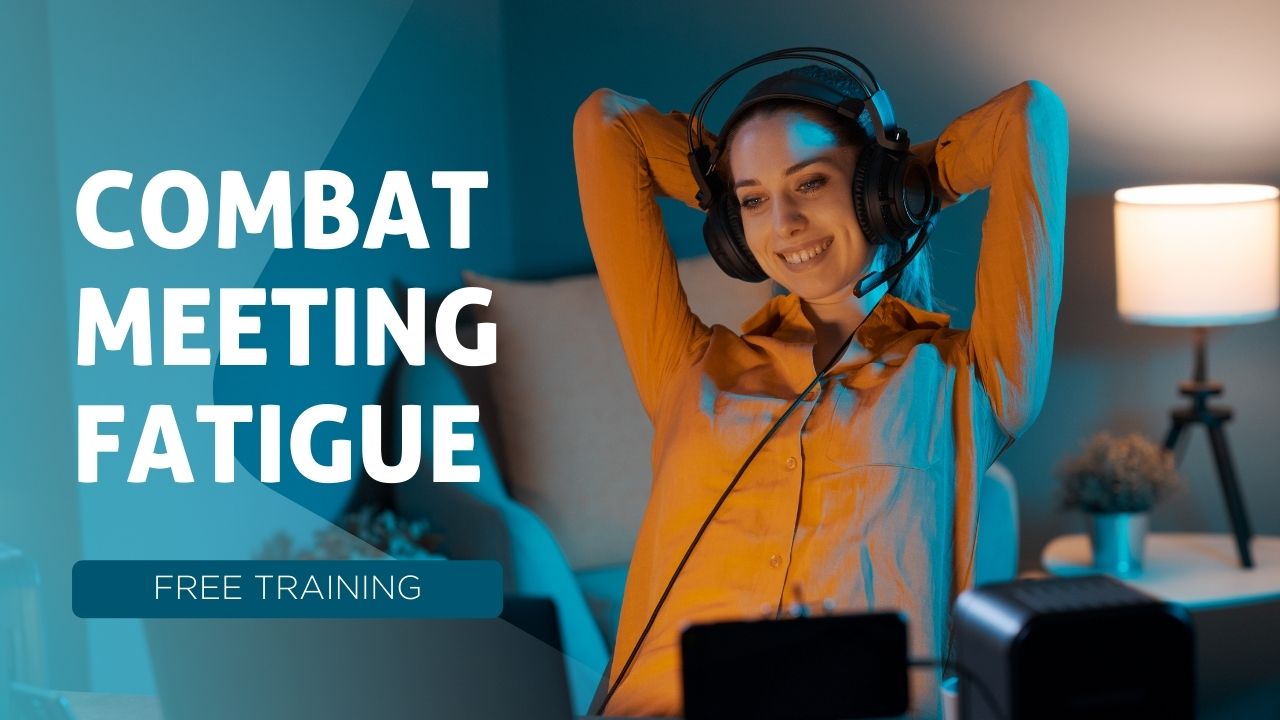 How do you combat meeting fatigue?

As a leader, you find yourself with too many priorities and it’s hard to know which to tackle first. You go from meeting to meeting with no gap and no space to do the actual work.

At Institute Success, we understand how it feels. You're not alone. We work with hundreds of executives, and what you're feeling is common. It's such a major problem that I want to show you why it happens so you know how to regain control.

Imagine feeling like you're in your rightful place, back at the wheel. You're confidently making decisions no matter what life throws at you. You feel in control. That's what you'll gain by reading this article.

Workplace stress can be caused by a number of factors. One of the most common is exhaustion. You lack the energy to complete your work or tasks at hand.

This may happen because of a variety of reasons including: not getting enough sleep; having too much on your plate; being overworked; feeling overwhelmed with responsibilities; dealing with an illness such as depression; experiencing relationship problems.

Everything adds to workplace stress. Nothing takes away from it unless you take action yourself.
A key factor adding to the levels of stress executives feel is Meeting Fatigue.

Meeting Fatigue happens when we don't plan, fail to hold our boundaries, or allow our drive to get a result take over.

In an ideal world, we'd only schedule meetings that need to happen. We'd limit the time to 30 minutes. We'd have an agenda... and stick to it. We'd have clear actions to take. We'd have a buffer between one meeting and the next.

The reality is very little of that happens. We're human. It's an immediate source of stress to know we're heading into a meeting because the last one didn't come to a conclusion, forcing us to hold another meeting.

The challenges of virtual meetings are more frustrating that in-person meetings. People rely on microphones encrusted in dust running on ancient laptops so the sound is muffled. They have Zoom backgrounds that distract you. Every time they speak you have to say, "You're muted".

It's draining. These are issues we don't face during an in-person meeting. Transmission delays can ruin the natural cadence of language, making it hard to stay engaged and focused. We're also unable to rely on non-verbal cues so our brains have to work harder to understand.

Meeting fatigue is a major driver of workplace stress.

The Difference Between Virtual Meetings and an in-Person Meeting

Imagine you've finished a virtual meeting. What's the first thing you do? You thankfully close the connection, stretch, and rub your eyes.

What do you do after a real life meeting? You tend to stay a while and talk. There's a gap where you make connections with people. You talk about personal life. You relax. There's little wonder back to back virtual meetings can be a source of chronic stress and impact your mental health.

The Connection Between Zoom Fatigue and Work-Related Stress

When your stress increases, everything gets harder. Think about your normal workload, and then add in one single extra unrealistic deadline caused by something outside of your control. Job stress immediately impacts how much emotional gas you have left in your tank.

Virtual meeting fatigue adds to your normal sources of stress and amplifies it. Your sense of control diminishes and it's at that point the problems start to accelerate. We find ourselves snapping and taking our frustration out on those around us.

Imagine a big red button on your desk. If that button is pressed, your brain instantly stops thinking rationally. Instead, it goes into flight or fight mode.

Now imagine that button is behind a screen. You can see it, but you don’t have control of it.
Instead, your inner caveman has total control over it. And your caveman loves to hit buttons.
It’s not looking good is it? Yet that’s the reality.

If you are feeling relaxed, your caveman is sleeping. There’s no danger of him smashing that button.

But if you feel stressed, or you’re tired, or you’re not sleeping well, then your caveman is awake. He’s looking for trouble.

And trouble can be anything, especially something that causes an emotional response. Remember, there is nothing rational about this. If a team member might be late with a report.

Someone interrupts you when you're in the middle of an email. A cashier gets your change wrong. These tiny things don’t normally matter. But if your underlying stress is high, it’s like someone’s thrown a rock at your caveman.

In a heartbeat, he’s slamming that button. It’s impossible to think rationally and you’re responding emotionally.

The amygdala is a primitive, emotional, part of your brain. When it kicks in it completely overrides your rational brain. The caveman is in charge.

It’s a great protective circuit in your brain. It helps you survive real, sudden physical threats. Imagine a car has an accident and skids into your path. It’s your amygdala that will save your life by getting you to jump out the way.

The trouble is, it’s trying to do the same thing in an office environment. And your response can be out of all proportion. Out of nowhere, suddenly you find yourself saying things you later regret and you ask yourself, “What's this going to cost if you don't regain control?”

A better question may be, "Do you want to keep doing this? And living like this?"

When there’s an elephant in the room, you can’t pretend it isn’t there and just discuss the ants.

There are three key aspect to an amygdala hijack.

Any strong emotion can trip off the amygdala. And when we’re feeling stressed, it happens so easily.

It's not fair. Nobody should work so hard they're exhausted and find themselves acting in a way that's not who they are. It leaves you feeling like you don't have control. You feel angry, frustrated, and it's all too easy to upset people.

There are two things you can do reduce the impact of the amygdala hijack. One is to force control back. You can attempt to do this by labelling your emotions. “I feel angry” or “I feel frustrated”.
This starts to directs your attention back to the rational part of your brain.

It’s not easy. You won’t want to do it in the moment. But if you can feel it starting to work, follow up by trying to identify the emotion and what triggered you to feel this way.

This starts to build your awareness, and you can get rational control back. But don’t forget it's a caveman hitting the button. He’s hard to wrest control from.

And, even if you can get this to work, there's an important point to realize. This is nothing more than a temporary sticking plaster over a bigger problem.

The root cause is the underlying stress. If you weren’t stressed, your inner caveman wouldn’t react in this way. He’d stay fast asleep.

But the lack of delineation between work and home life is exhausting. It drains your tank of emotional energy.

There are many stressors at work. “Why won’t my team just do what I need them to do?”

As mentioned above, one of the biggest sources of chronic work stress are the endless meetings. Work is relentless and you go from meeting to meeting without a real buffer between them. Each meeting creates more work, and you don’t have time to do the work because you’ve got another meeting.

How To Regain Your Sense of Control

If that’s where you find yourself, we’ve created a short course to show you how to regain control.

We’re going to give you a simple, immediately actionable technique. It's going to transform how you feel about whatever is giving you stress. You’re going to leave with a brand new way of getting yourself feeling relaxed, confident, and in control.

Next time you see your calendar filled with endless meetings, or you have so much to do and don’t know where to start, don't worry. You'll be able to use our Emotional Trigger Sweep to take back control.

Work and life are so busy. There are too many important things you need to do. This sense of overwhelm can make you feel angry, frustrated, and that you’re the only one who is going through this. It’s not right.

You shouldn’t be in a position where you’re exhausted and you’re not acting how you normally would.